“In the 1990s of the 20th-century decorative trends break in Georgian fine arts with new expositions and potency. ornamentalism comes as one of the determinants in an artistic manner and in emotional influence over the spectator. The compound of Georgian artistic experience and European tradition provides a various and fascinating capacity of creativeness in this space\field. Maya Ramishvili is one of the artists, who’s art helped the two origins confluence and create an expressive world, distinguished with aesthetics and harmony. Her style is dominated by feminine topics, mostly female figures depicted with a harmonious mixture of elegance and simplicity.  Her works are kept in private collections in Georgia, Turkey, Germany, UK, Israel, France, Italy, Spain, Canada, USA.”
The List of Exhibitions: 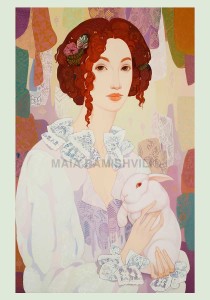